Ford’s Defective Door Latches May Cause Doors to Open While Driving! 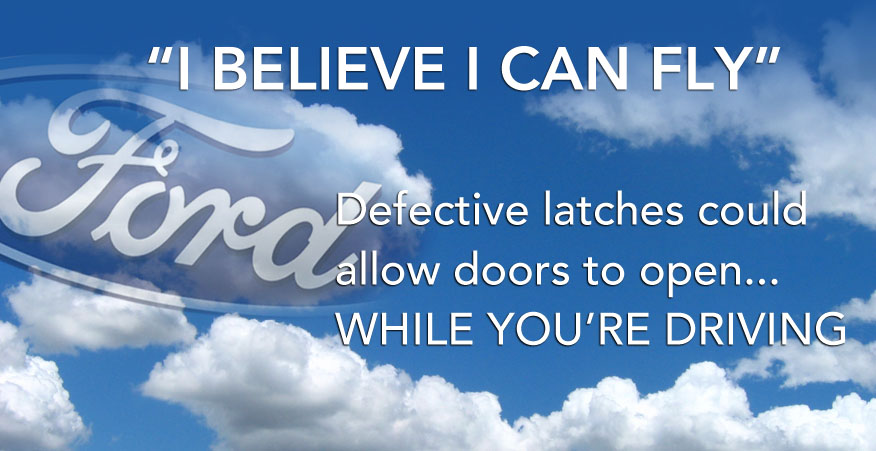 Imagine driving down the highway and your car door(s) suddenly open. If you are the owner of a Ford Fusion or a Lincoln MKZ from the 2013 and 2014 model years, or a Ford Fiesta from 2011 to 2014, your imagination could become an alarming reality.

Ford is expanding a recall to fix door latches that may not stay closed. The recall now covers almost 546,000 vehicles manufactured at a factory near Detroit. Previously the company thought all of the cars were made in Mexico.

WASHINGTON – In response to Ford Motor Company’s recall of approximately 390,000 Ford Fiesta, Ford Fusion and Lincoln MKZ vehicles, the U.S. Department of Transportation’s National Highway Traffic Safety Administration advises owners of affected vehicles to watch for notification from Ford and get their vehicle fixed as soon as possible.

The defective door latches on these vehicles can prevent the door from properly closing. This can result in the door opening while the vehicle is moving.

Many customers indicated that the door would not latch at all so they decided to restrain the door by other means (looping the seatbelt through the door, or using rope or tape) in order to drive the vehicle. Some customers also reported multiple door latch failures occurring on the same vehicle on different doors occurring months apart.

NHTSA recommends that if you experience difficulty getting the door to latch while attempting to close it, do not drive the vehicle, even if it appears the door has latched. Do not attempt to temporarily secure the door in a closed position (e.g., with a rope or by using the seat belt), and do not have an occupant attempt to hold the door closed while the vehicle is being driven. Be safe and have the vehicle towed to the nearest dealership instead.

In November 2015 NHTSA closed the investigation into why the door latches on the Ford Fiesta, Fusion and the Lincoln refused to stay shut following a recall by Ford to replace all four door latches on affected models since the recall action initiated by the manufacturer appeared to address the safety risks of concern to ODI.

Two months later (January 2016) NHTSA has opened a similar investigation into the 2012 and 2013 Ford Focus after receiving consumer complaints regarding the doors not remaining latched. As of this post, Ford has not yet issued a recall notice for the Focus and it remains unclear as to why they consider the door latch safety issue with the Focus not as serious as it is with the Fiesta and Fusion. Perhaps Ford is waiting for NHTSA to demand they issue a recall. Or perhaps Ford is hoping there will not be enough complaints regarding the door latches on the Focus to warrant a recall.

You can check your vehicle’s identification number (VIN) online at www.safercar.gov/vin to see if it is included in the recall.

Ford’s door latch problems (along with their transmission problems) have been going on for years, with some door latch complaints dating back to 1994 on the Ford F150.

Recalls are typically brought to your attention by the Manufacturer; often before you even realize that there is a problem. However, if your defective vehicle is not adequately repaired during a recall, or the dealership is unable to fix the defect according to the protocol, you may be entitled to file a lemon law claim to remedy the situation.