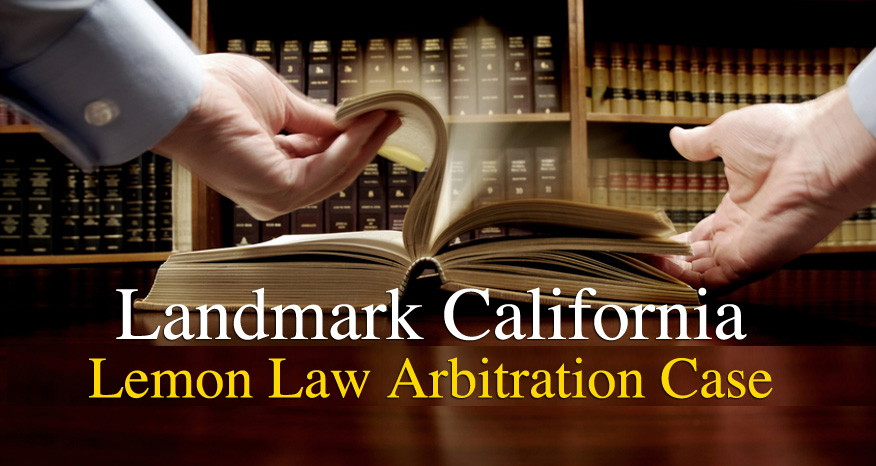 On June 4, 2013, the California Court of Appeal for the Second Appellate District issued a ruling in a lemon law case holding that the arbitration clause in California’s standard automobile sale contracts is illegal and unenforceable. This landmark case is called Vargas v. Sai Monrovia B, Inc. (Docket No. B237257).

The Plaintiff purchased a Mini Cooper S from Assael BMW Mini of Monrovia, California. Plaintiff’s Mini Cooper proceeded to have numerous mechanical problems so Plaintiff filed a lawsuit against Assael BMW for both fraud and lemon law violations. Plaintiff’s lawsuit alleged that the Retail Installment Sales Contract (RISC) for the Mini Cooper illegally included an inflated California Tire Fee, charged the Plaintiff a $28 fee for the DMV Electronic Filing Fee without informing him that the fee was optional and not mandatory, and after Plaintiff purchased the vehicle, it began to experience numerous defects and malfunctions, including a window that would not open and close properly, headlamps that did not work, repeated activation of the “CHECK ENGINE” warning light, lack of power on acceleration, poor gas mileage, and a knocking noise. Based on these defects, the Plaintiff alleged that Assael BMW violated the California lemon law and other consumer protection laws. Plaintiff’s lawsuit was filed as a class action on behalf of himself and all other consumers (Plaintiffs) who were victimized by Assael BMW’s allegedly illegal business practices.

Assael BMW’s RISC contained an arbitration provision so once they were served with the lawsuit, Assael BMW filed a motion to compel arbitration. Arbitration is defined as the submission of a dispute to an “unbiased third person” designated by the parties to the controversy, who agree in advance to comply with the award—a decision to be issued after a hearing at which both parties have an opportunity to be heard. Arbitration is a well-established and widely used means to end disputes. It is one of several kinds of Alternative Dispute Resolution , which provide parties to a controversy with a choice other than litigation. Unlike litigation, arbitration takes place out of court, and the arbitrator’s decision is usually final, courts rarely reexamine it. The main problem with arbitration is the arbitrator is rarely an unbiased third party. The RISC used by Assael BMW is a form document and is the same RISC used by most car dealerships. The RISC states that the dealership will pay for the arbitration, which unfortunately, means that oftentimes, they are paying the same arbitrators over and over again. This typically leads to arbitrator bias towards the dealerships because the dealerships are paying them, not the consumer.

Consumer attorneys almost universally agree that arbitration is unfair to consumers for numerous reasons, including the facts that: Arbitrators’ fees are paid for the businesses, Arbitrators rule in favor of businesses and against consumers more than 90% of the time, the rules of discovery (the process by which consumers prove their cases using evidence) are limited in arbitrations which makes arbitration hearings and the whole arbitration process more favorable for businesses, not consumers, and businesses often include special rules in their arbitration clauses designed to favor them over consumers.

After Assael BMW’s moved to compel arbitration in the trial court, the Plaintiffs filed declarations stating that they were presented with a stack of documents, and were simply told by Assael BMW’s employee where to sign and/or initial each one. The Plaintiffs also stressed that the sale documents were pre-printed form documents, and that the Plaintiffs were not given an opportunity to negotiate any of the pre-printed terms. The Plaintiffs also claimed that they did not even realize the contract had a second, back side with additional terms, and that they had no reason to suspect that the back of the RISC contained an arbitration provision containing a class action waiver. The trial court granted Assael BMW’s motion to compel arbitration and Plaintiffs appealed to the California Court of Appeal for the Second Appellate District.

The Court of Appeal ruled that the arbitration clause in Assael BMW’s RISC was unenforceable because it was unconscionable. Specifically, the Court of Appeal ruled that the Plaintiffs were not given enough notification of the arbitration clause’s provisions and that the provisions themselves were unfair and one-sided. The RISC was a preprinted document consisting of one page that was eight and one-half inches wide and twenty-six inches long. There were extensive provisions on both sides of the RISC, leaving little in the way of margins. While the Plaintiffs signed or initialed the front side in twelve places, each relating to a different provision, no signatures or initials of the buyers were required on the back; there were no places on the backfor the buyers to initial or sign. In addition, the buyers’ final signatures were near the bottom of the front side. The court also emphasized that the Plaintiffs’ declarations stated that the dealerships’ employees told them where to sign, and that the dealership’s conduct deprived Plaintiffs of an opportunity to read the RISC.

In particular, the arbitration clause permitted an automatic appeal of any award of over $100,000.00 or which included injunctive relief. The Court of Appeal ruled that this would benefit only dealers and not consumers. Under the arbitration clause, consumers were entitled to appeal awards only if they were exactly zero. Also, consumers who did appeal would be forced to pay for a three-arbitrator panel, which would likely be tens of thousands of dollars. Finally, the Court of Appeal ruled that the arbitration provision was unfair and one-sided and it allowed the dealership to repossess vehicles in disputes with customers but required all lemon law and fraud claims to be arbitrated.

Based on these multiple “unconscionable” provisions, the Court of Appeal ruled that the arbitration clause was unenforceable, and that the Plaintiffs were entitled to bring their legal claims in court. Because dealership arbitration clauses are unfair and one-sided, the Vargas decision is a major victory for consumers, and will enable more consumers to bring lawsuits to enforce their legal rights under the lemon law, fraud, and consumer protection statutes.

For a cautionary tale about arbitration in RISCs for the purchase of new or used vehicles, please visit http://mossyscrewedme.com/  or http://www.ripoffreport.com/r/Mossy-Toyota/San-Diego-California-92109/Mossy-Toyota-Mossy-Toyota-Pacific-Beach-Pawns-off-Defective-Vehicle-then-holds-Consumer-1041016.  These websites detail Jon Perz’s seven (and counting) year battle with Mossy Toyota of Pacific Beach, in San Diego, California. On February 16, 2007, John Perz purchased a used 2002 Ford from Mossy Toyota of Pacific Beach and on the road test, he noticed a vibration. The sales person told him that the dealership would fix it after Mr. Perz purchased the vehicle. Mr. Perz purchased the vehicle in reliance on the dealership’s representations and after bringing the vehicle to the dealership several times in the first week of ownership, it became clear to Mr. Perz that the vehicle could not be repaired. Mr. Perz asked Mossy Toyota to take the car back and they refused. Mr. Perz then found out that Mossy Toyota was aware that the vehicle had extensive rust damage, had likely been submerged under water, and had been involved in a previous accident even though Mossy Toyota showed Mr. Perz a clean Auto Check report before selling the vehicle to him. Mr. Perz hired an attorney and filed suit against Mossy Toyota. In response, Mossy Toyota filed a motion to compel arbitration and the San Diego County Superior Court granted the motion forcing Mr. Perz to arbitrate with Mossy Toyota. That was seven years ago and according to Mr. Perz’ website, Mossy Toyota has refused to pay for an arbitrator, thus the case has stalled for the last seven years. Beware of agreeing to an arbitration clause.