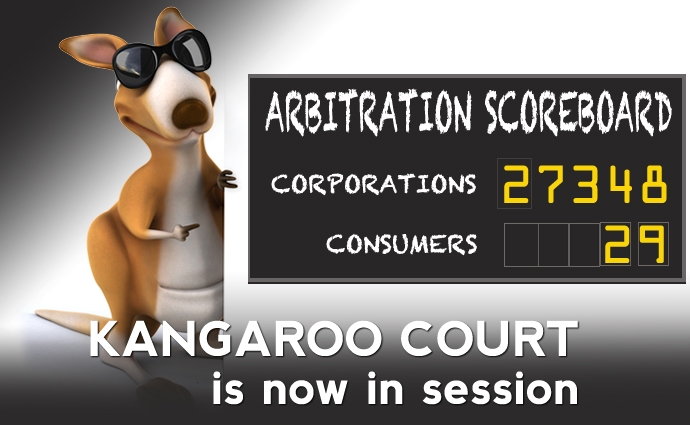 Dealerships typically ask consumers to agree to arbitration in a stand-alone agreement or as part of the retail installment sales contract signed in the F&I (Finance and Insurance) office. The arbitration clause is usually buried somewhere on the backside of the contract, interspersed amongst other legal jargon written by attorneys, for attorneys, that consumers never really read.

Arbitration provisions in consumer contracts are not voluntary, especially when an entire industry has adopted them.

Auto dealers are independent from the manufacturers so you should also check your warranty book for their arbitration clause. This pre-litigation requirement is included in most manufacturers’ warranty manuals.

The manufacturer’s warranty probably requires you to participate in a non-binding “informal dispute settlement procedure” (arbitration) through either the BBB’s Auto Line® program or another provider called the Dispute Settlement Board. This arbitration is non-binding in the sense that if you don’t like the outcome, you can pursue the warranty claim in court.

With arbitration, the parties bring their case to an arbitrator who reviews the complaint and makes a decision. Arbitrated decisions are binding on the manufacturer, once accepted by the consumer.

If the consumer loses at arbitration (and the vast majority of consumers lose) or if the consumer is dissatisfied with the remedy awarded to them, the lemon law allows the consumer to file a lawsuit.

If your vehicle was manufactured by the Ford Motor Company, General Motors, or one of the other manufacturers listed below, you may be required to go through arbitration before you can file a lawsuit under the California Lemon Law.

BBB Auto Line does not charge a fee to consumers. To protect impartiality, funding for staff and program administrative costs of BBB AUTO LINE are committed in advance by the participating manufacturers. — From the BBB website.

On the surface, it would seem like going through the BBB dispute resolution program is a good idea. As it turns out, not so much.

Arbitrators are biased in favor of the businesses that pay for the arbitration. If arbitration didn’t benefit the automobile manufacturers, why would they pay the BBB in advance for participating in the program?

Some Automobile Manufacturers are Worse Than Others in Regards to Arbitration

As an example, Ford’s rules make it harder to establish liability under the BBB Auto Line® program because the defect has to show up within 18 months or 18,000 miles from the warranty start date (which may not be the same as the date you purchased the vehicle). The Ford factory warranty start date begins on the date the vehicle is delivered to the first retail buyer or put into use, whichever occurs first.

What if you were purchasing a dealer demo and the vehicle was “put into use” a few months before you purchased it? It is entirely possible for your warranty to have started before you bought the vehicle which would mean that you would receive less warranty coverage than you are supposed to.

Arbitrators rule in favor of businesses and against consumers more than 90% of the time. The rules of discovery (the process by which consumers prove their cases using evidence) are limited in arbitrations and this makes arbitration hearings and the whole arbitration process more favorable for automobile manufacturers instead of consumers.

In a recent arbitration case involving the BBB Auto Line program, the arbitrator denied the consumer a buyback request, even though the arbitrator agreed that the vehicle’s defects did substantially impair the use, value, or safety of the vehicle. The rationale for the denial was the dealership mistakenly believed that the transmission and suspension system defects [in the Ford Focus] are ‘normal’ operating conditions.

Click here to read  the arbitration decision. (Confidential information has been redacted from this document.)

Future Hope for Consumers? It Depends.

Dealerships could soon be barred from using an arbitration agreement.

As a result of the Dodd-Frank Wall Street Reform and Consumer Protection Act (better known and most often referred to as “Dodd-Frank”) that was signed into law in 2010, a new regulatory agency called the Consumer Financial Protection Bureau was created. Congress required this new regulatory body to do a study into how arbitration clauses affect consumers and financial services companies. The Dodd-Frank Act gave the Consumer Financial Protection Bureau the power to make regulations that would protect consumers.

As you may already suspect, automobile dealers, automobile manufacturers and their lobbyists have far more pull in Congress than “We the people.”

Mandatory arbitration clauses are so insidious that even the car dealers are against them — but only if removing them is to THEIR benefit. The National Automobile Dealers Association (NADA) wrote to members of Congress in 2000 saying that if arbitration clauses weren’t outlawed for the dealerships, mandatory binding arbitration clauses would be able to unilaterally deny small business automobile and truck dealers rights under state laws that are designed to bring equity to the relationship between automobile manufacturers and dealers. Congress agreed and passed legislation protecting the dealers. Apparently, though, car dealers did not (and still do not) see a problem in using an arbitration clause with their own customers. (See: Senate Hearing 106-1066, Serial No. J-106-68)

For dealers, the end of arbitration would mean they would no longer have what they claim is a way to speed up dispute resolution, cut costs (for them; not for the consumer), help keep them out of court and minimize the risk of class-action lawsuits. If auto dealers are so concerned about potential class-action lawsuits, wouldn’t it stand to reason that if they took care of their customers — the very people who keep them in business — the way they want the automobile manufacturers to take care of them, then lawsuits would be a non-issue?

Arbitration agreements are used in the majority of contracts. Not only in vehicle purchases, but also with any purchase a consumer makes involving a retail installment sales contract. Everything from cell phone contracts, to the appliances, to whatever a consumer purchases that involves signing a contract.

Know your rights and the remedies to which you are entitled.

The inherent problems with the BBB arbitration rules show that a consumer should be careful going into a BBB arbitration without at least speaking to a Lemon Law attorney first.

Lemon Laws, Warranty Laws and Arbitration are very complex topics and impossible to describe comprehensively in a blog post. It would be in your best interest go give us a call to find out whether or not you have a lemon law case and whether or not you are required to go through arbitration before you file a lawsuit. It will be during our consultation that we will be able to offer the best course of action for you to take.

PARTICIPATING MANUFACTURERS IN A STATE-CERTIFED ARBITRATION PROGRAM; FOR THE STATE OF CALIFORNIA