How Can an Attorney Help Determine if My Car is a Lemon?

Since the first automobile was manufactured, no vehicle has come off the assembly line absolutely free of defects. These defects can range anywhere from the very minor, easily resolved problems to defects — or hidden faults — that warrant the car being classified as a “lemon.”  Not all bad cars qualify as lemons, so it’s important to know how and when California’s Lemon Law applies to your particular vehicle and situation.

The law surrounding automobile recalls and lemon laws is complicated, and the facts of your case may be unique. However, complicated laws and teams of attorneys representing the auto manufacturers do not mean that you’re stuck with a lemon. As Lemon Law experts, we’re well versed in all the ways auto manufacturers try to get out of paying the compensation that you legally have a right to. We’ve heard the “that problem is common in that type of car” excuse many times, and we know when dealers and manufacturers are trying to intimidate the consumer. By reviewing your repair documents, interviewing you about the problems you have been having, and conducting some automotive research, we will be able to tell you if your particular situation meets the criteria for a Lemon Law case, and will be able to help you to get the compensation that you legally have a right to.

Prior to 1980, California’s state law said consumers had to give manufacturers a “reasonable” number of repair attempts before a car could be considered a lemon. But no one knew exactly what was meant by a “reasonable number of repair attempts.”  Manufacturers don’t always want to fulfill their obligations, even under the law, so California lawmakers added a special section to the Warranty Act—Civil Code section 1793.22 (now known as the Tanner Consumer Protection Act — part of the Song-Beverly Consumer Warranty Act / California Lemon Law) to give guidelines in making a reasonable legal “presumption” that the manufacturer has had enough time or opportunities to repair your vehicle, but still did not fix it.

It wasn’t until Rosemary Shahan, advocate and founder of Consumers for Auto Reliability and Safety (CARS), championed for the California Lemon Law that consumers were granted protection under the law. Since then, she has helped to pass laws regarding other federal vehicle regulations over the past few decades and she currently advocates for the passage of a bill that will prohibit the sale of recalled used cars.

As a word of caution; If you’re thinking about starting a lemon law case, don’t post about it on any of the social media sites, including your own. Also, remember to keep all of your repair orders and invoices so that in the event you need a lemon law attorney, you have all of the evidence in your possession.

Trivia: When was the first time the word “lemon” was used to describe a bad car? 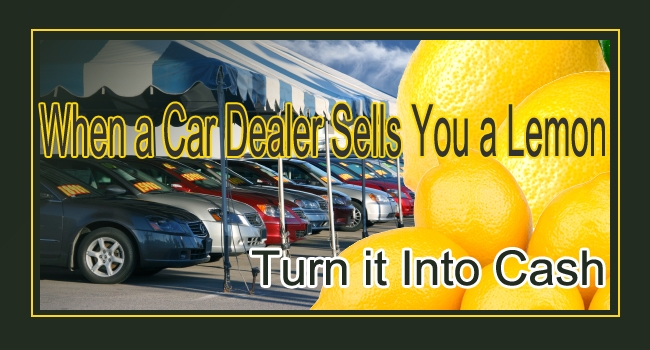 The origins of the word “lemon” being used to describe a defective car are a bit murky. However, the online Etymology Dictionary indicates that there are a few possible origins for the word being used to refer to a bad product:

lemon (n.2)
“worthless thing,” 1909, American English slang; from lemon (n.1), perhaps via criminal slang sense of “a person who is a loser, a simpleton,” which is perhaps from the notion of someone a sharper can “suck the juice out of.” A pool hall hustle was called a lemon game (1908); while to hand someone a lemon was British slang (1906) for “to pass off a sub-standard article as a good one.” Or it simply may be a metaphor for something which leaves a bad taste in one’s mouth.

It was also used (by a used car salesman) in an episode of The Twilight Zone (1961): The Whole Truth

Excerpt from the script:

Well? How much is it?
It’s not for sale.
Why not?
Uh well, I don’t know.
This car we were just sitting in. That’s the one you were pushing.
Yeah, sure.
I guess I’m not pushing it anymore.
This is a wreck, it’s a rum-dum.
It oh it hasn’t got any points, it hasn’t got any rings it hasn’t got any plugs and it’ll leak gasoline like it owns every oil well in Texas.
But the tires are very bad, and the chassis’s been bent and if i said anything about it being a runabout why, I meant it would run about a block and then stop.
And it’ll cost you double what you pay for it when you start taking it in for repairs and you’ll start taking it in for repairs every third thursday of the month.
Well, what else have you got?
Oh, what else, well I haven’t anything else worthwhile to show you.
Everything in this lot should have been condemned years ago.
I got more lemons per square foot than a fruit grower in Salinas.