Do You Trust the Airbags in Your Vehicle? 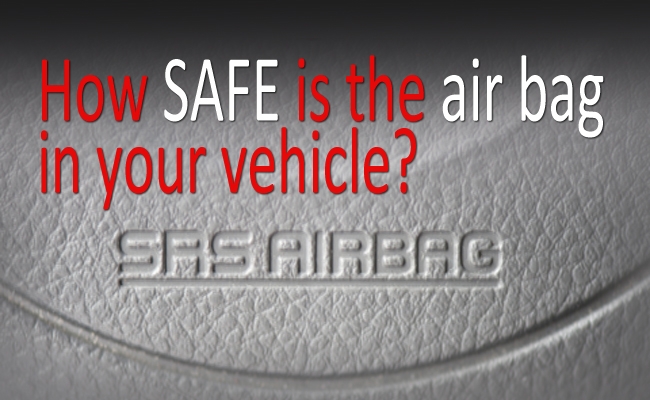 Last week, Nissan, Honda, Mazda, BMW, Ford, Chrysler, and Toyota announced they would have a combined recall of millions of vehicles equipped with airbags manufactured by Takata that could explode under certain circumstances, sending metal shrapnel into the vehicle.

Takata Corp., one of three major manufacturers of airbags, has had problems with their air bag inflator since 2009, which has resulted in recalls of 10 million vehicles over the last 5 years.

The U.S. National Highway Traffic Safety Administration said on Monday (June 23, 2014) Nissan, Honda, Mazda, BMW, Ford, Chrysler, and Toyota would conduct regional recalls on vehicles equipped with Takata airbags.  Takata suspects that humidity may be causing the airbags to explode so this recall targets Southern states and territories with hot and humid weather.

Subaru has now joined the ranks of automakers issuing a recall;  more than 8,500 Legacy, Outback and Baja cars from the 2003-2004 model years because they are equipped with defective Takata air bag inflators. However, unlike the recalls focusing in areas with high humidity, Subaru is issuing a nationwide recall.

Also issuing an airbag related recall is Hyundai. Hyundai is recalling 58,000 Elantra Touring wagons, after it was discovered that a metal support bracket in the headliner could become dislodged when the side-curtain airbag deploys. If this happens, occupants could suffer lacerations.

Many of the vehicles with Takata airbags had already been recalled once for inspection in 2013, but Toyota said it had received an incomplete list of potentially faulty parts from Takata the first time around.

The first recall related to the exploding airbags came from Isuzu in 2001 and was followed by a Honda recall in 2008. More recalls occurred in 2009, 2010, 2011 and 2013. Earlier this month, Toyota issued the first recall in 2014 related to this nefarious problem. All told, there have been at least 20 recalls tied to the exploding Takata airbags over the past 13 years – and more may be coming.

If you have brought your vehicle in for airbag related problems four or more times and the repairing dealership has made warranty repairs, we may be able to help you with a lemon law case. Call today for a free case evaluation, toll free (855) 595-3666.